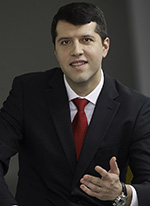 After having recorded an increase of 639% of revenues over the past 5 years, Teamnet was included for the 6th consecutive year in the “Deloitte Technology Fast 50 Central Europe” ranking and is the only Romanian company included in the “Big 5” category of the 2013 edition thereof, occupying the 3rd place in this ranking.

In December 2013, Bogdan Padiu announced the rebranding, which came in the context of Teamnet transformation into a regional group focused on developing large technological projects with impact on society.

Teamnet aims at launching new products and complex projects to support the development of Romania and of the countries in the region, involving in research and development projects, expanding at international level and reaching the threshold turnover of 100 million Euros in the next 3 years.

The Group is currently running projects in 10 countries in the region and, in the next five years, it will open another 12 regional offices in countries such as Poland, Italy and Russia. Following the expansion, over 40% of turnover will be achieved from operations outside the country in 2018.

Once with the relaunch of IT investments of the private sector, Teamnet aims at generating 30% of turnover in projects with private companies within five years.