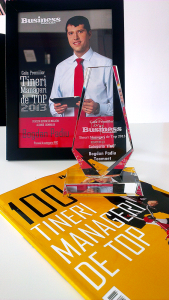 Business Magazin granted, on Wednesday night, during the gala 100 TOP YOUNG MANAGERS, ten awards to the best performing young managers in Romania, who can also be found in the eighth edition of the catalogue “100 young top managers“, launched on this occasion.
Business Magazin rewards each year the managers up to the age of 40 that have achieved business performance and stood out in their field.

Ştefan Gaibu, Manager of the Logistics Department at Dacia, award in the category Industrial Markets;

19.40: The guests entered the hall. The gala will start in a few minutes.
19:50: Amalia Enache, the host of the event speaks about the recipe of the successful youth: “Do you remember what Romania looked like in 2006? That was when the first catalog 100 TOP YOUNG MANAGERS” appeared
20.00: The guests review the winners of the seven years of the Business Magazin gala – 100 TOP YOUNG MANAGERS.
20.01: Cristian Hostiuc, editorial director of Business Magazin: We see the history of Romania in the last eight years. I remembered Iulian Dascălu, the mall king, or Raul Ciurtin from Albalact, who are still in the business environment. Others were lost along the way, such as Turabo, who was swept away by the crisis. The Business Magazin magazine writes about the stories of people and brands in the Romanian business. It is with pride that we succeed year after year to find young managers in leadership positions, that we bet on, and of whom we are proud. We aim to get books out in which to put people’s stories in one place. Perhaps our descendants will want to read about the people and brands that were shaped in Romania.
20.03: Ioana Mihai, editor Business Magazin: Every year we wonder if we find another 100 relevant successful youths. Top managers still exist, they grow and we discover interesting stories that arouse the readers’ interest. We are glad to see the young people we believed in confirming, bring pluses to the companies in which they work and that the entrepreneurs proposed by us are ever more powerful.
20.05: Start of the discussion between the managers from previous generations. Participants are Cristian Sporiş, Raiffeisen Bank; Cătălin Olteanu-Heel, FM Logistic; Vlad Sterescu, CGS Romania.
20.08: Cristian Sporiş, Raiffeisen Bank: In life there are also false leads, and people left from one bank to another looking at the salary, but not necessarily building careers. It is important to have a vision and to get on when the train stopped. When I appeared in the 2006 edition I have shown my daughter and told her -Here’s daddy in the picture!-
20.10: Cătălin Olteanu-Heel, FM Logistic: When I appeared in the catalog i was promoted to general manager. I have a friend who says he’s got a problem with these positions: apparently the salary increases, but if you look at the hourly payment, it decreases. ITM should look for me on planes or in airports. Now everyone is chasing after everything to survive. It’s up to us to know when to stop running.
20.15: Vlad Sterescu, CGS Romania: I was lucky. I worked with the best people and learned this job from the best people. In a call center it is ideal to call a hundred times and to get the same response.
20.20: Cristian Sporiş, Raiffeisen Bank: I indebted Romania with 300 million euro in the six months I was in the Government.
20.21: Cătălin Olteanu-Heel, FM Logistic: The luck is to meet the people from whom you can learn and take what’s good from them and succeed in implementing it. We must export the young talents of Romania because one day they will be grateful and bring to Romania the knowledge acquired in another country.
20.26: Vlad Sterescu, CGS Romania: I was the first employee in the call-center. Together with Softwin we managed to form an industry in Romania. I wouldn’t advise anyone to start a call center business now. There were other times then.
20.40 – The six winners of the evening in the fields of activity category are:
financial services- Paul Ursaciuc, Vice-president Operations & IT at BCR (the award will be presented by Romtelecom)
consumer markets- Dorina Dobre, General Manager Recunostinta, part of the Cristim group
IT&C- Bogdan Padiu,CEO Teamnet
Industrial markets-Ştefan Gaibu, director of the logistics department at Dacia,
Other Services -Tatian Diaconu, CEO Immochan
Entrepreneurship- Oana Simion, General Manager Novei Medical
21.10 – The four special awards of the evening were given to Costin Raiu, director Global Research & Analysis, Kaspersky Lab; Dani Caramihai, Fratelli shareholder; Alina Popa, CFO Petrom; Alexandru Coşbuc, deputy vice-president International Accounts & Partners, Siveco Romania.
21.30 – Business dinner. The guests socialize and congratulate one another for the awards they won