Home Media Press Releases Teamnet received the „Project of the Year” award for a cross-border IT project
12.11.2013 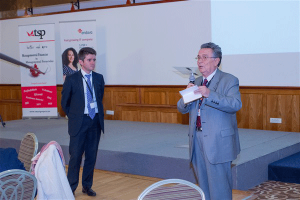 Bucharest, November 12th, 2013 – TeamNet has won the “Project of the Year” award with their “Disaster Scenario Software” project, developed for The National Institute for Earth Physics. The “Project of the Year” award is given by a panel comprised of members of the PMI Chapter Romania organization and was selected among winning projects in the six categories of the contest: IT, European Funding, CSR, Research, Construction and Education. “Disaster Scenario Software” developed by TeamNet also received the award in the IT category, and the HIRRUS miniUAV system developed by the same company was selected the winner of the Research Projects category.

“TeamNet develops complex technology projects with a positive impact on the society. In order to be successful in such endeavors, the investment in a high-performance project management department is essential. The past eight years, we have managed to form top managers, and the results are visible. We’re proud that, through the projects we develop, we are a company which also contributes to the evolution and transformation on a local level,” said Bogdan Padiu, CEO TeamNet.

The Disaster Scenario Software was implemented in 2012 by a team of company experts for The National Institute for Earth Physics. The project is cross-border, as it also involves The Bulgarian Institute of Geophysics, Geodesy and Geography, aiming to design and implement an earthquake alert system as well as an emergency recovery response plan targeting the bordering area between Romania and Bulgaria, thus involving institutions from both countries.

Thirty or forty seconds before the dangerous shock wave generated by earthquakes in Vrancea area reach these geographical areas, the system alerts the Romanian and Bulgarian institutions involved, sending them impact maps and the parameters of the earthquake. Moreover, 28-150 seconds after the earthquake, the system sends damage assessment maps, notifying the authorities on the potential losses and the most affected areas. Therefore, the system helps authorities to correctly assign necessary resources to the areas where human lives and goods are at risk, thus optimizing the results of rescue missions.

The project incorporated the vast knowhow and expertise of the TeamNet team, who developed and integrated a multi-modular application based on dynamic GIS cartography and earthquake monitoring sensors in order to provide specific scenarios regarding the social, economic and geographic impact of potential earthquakes.

This project is also the first UAV system developed by TeamNet, and so all its components, starting with the electronic and mechanic parts and ending with the hardware and software, were designed, simulated, developed and produced from scratch by the company’s research department. The objective of this significant research and development effort was to create an original, innovating product, able to generate a positive technological, commercial and marketing impact in the following years.

TeamNet was awarded three prizes: Project of the Year, Best Research Project and Best IT Project at the PMdays 2013 conference organized by PMI Romania Chapter. The PMI Romania Chapter professional association is the official representative of the international Project Management Institute (PMI) organization in Romania, whose main aim is to promote and develop local project management initiatives.

With its Project of the Year (POY) awards, PMI Romania Chapter recognizes and promotes successful projects implemented within the previous year, as well as the project management teams responsible for them. Distinctions are awarded in six categories: IT, European Financed, CSR, Research, Construction and Educational.

With over 12 years of experience on the market, TeamNet is one of the leading IT integrators in Romania, with a diverse portfolio that includes GIS, Big Data and hardware projects, systems integration projects and custom software development for clients in administration, transportation, environment, health or agriculture.

The overall turnover of the TeamNet group exceeded 50 million EUR in 2012. TeamNet was included, for the fifth consecutive year within the Deloitte Technology Fast 50 Central Europe top, which ranks companies depending on their revenue growth rate.