Home Media News The new generation of executives and entrepreneurs: luck is all about meeting people from whom one can learn and acquire their best assets
24.05.2013

The new generation of executives and entrepreneurs: luck is all about meeting people from whom one can learn and acquire their best assets 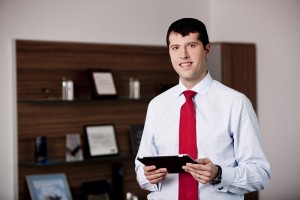 As of 2006, every year, Business Magazine’s Catalogues have gathered career success stories from 800 top young managers.

Business Magazine handed out, on Wednesday night, during the 100 TOP YOUNG MANAGERS CEREMONY, ten awards to the highest achieving young managers in Romania, whilst including the same in the eighth Edition of the “100 Top Young Managers” Catalogue, which was launched during the same event (www.bmag.ro).

Everyone included in the catalogue truly are winners in this economic environment. The entrepreneurs that have succeeded in expanding their business, in reinventing their craft, the company executives who keep tracking new growth generators are both the ones changing the economic environment, and valuable role models. Each Catalogue Edition presents managers aged up to 40 years old that have achieved business performance and have excelled in their line of work. As of 2006, every year, the catalogues have compiled career success stories from people who have skipped stages, progressing at a pace each university student probably dreams about. Romania’s dynamic environment, where markets, businesses, niches, are still emerging, constitutes one of the great opportunities provided by the local economy in terms of career growth.

“Life will present you with false leads, and some people have left from one bank to the other only based on salary levels, but failed to build up careers. It is important to have a vision, and be able to hop on that train as soon as it has stopped“, explained, during the Ceremony, Cristian Sporiş, VP corporate banking with Raiffeisen Bank. He was included in the First Edition of the Catalogue, in 2006, as he received an award from Business Magazine in the financial services category.

“I was lucky. I have worked alongside the best people and have mastered this job from the elite. In a call-centre, it is best to call one hundred times and get the same answer”, stated, during the awards ceremony, Vladimir Sterescu, country manager with CGS România, with reference to his career evolution. He was among the managers attending the “2007 Top Young Managers” Edition, as the winner of the “IT&C” Category Award.

“Luck is when you come across people from whom you can learn, acquire their best assets and be able to put this into practice. We need to export young talents in Romania, because one day they will be grateful and will bring into Romania knowledge they had acquired in various other countries”, stated, during the event, Cătălin Olteanu-Heel, FM Logistic Romania General Manager, presented in the 2010 Catalogue.

The Business Magazine Awards Ceremony has been staging, for the past eight years, the vision of those who stand for “the new wave”, people who are transforming Romania poignantly, using their energy and creativity. This initiative means that Business Magazine’s team of professionals will select and promote young managers who are currently leading some of the most prominent businesses in Romania and who best represent the business environment for ten years to come.

For the past 15 months, Tatian Diaconu has been leading Immochan România, the real estate division of Auchan Retail Group, initially employed in order to set up and expand this company’s business on the Romanian market. His team and he are currently developing two retail projects – Coresi Braşov and a shopping centre in Drumul Taberei, Bucharest -, with an aggregate investment value reaching 120 million euros. His responsibilities might double by the end of this year, as soon as Real Hypermarkets Networks has been absorbed by Auchan, a transaction that was concluded last year and is awaiting endorsement by the Competition Council.

He leads TeamNet, an IT business he started 12 years ago, with a current turnover exceeding 45 million euros. He started his career ever since high school, precisely in the IT line of work, as a programmer, and, by the time he enrolled in University, he had already acquired relevant professional experience, as well as developed complex applications for a private company. However, in 2001,  having just graduated from The Bucharest University of Economic Studies, Bogdan Padiu decided to turn to entrepreneurship, so he and a group of friends set up TeamNet, an IT business with an business plan based on an initial investment amounting to 100,000 US dollars.

He is the youngest manager in charge with production activities carried out on the industrial platform located in Mioveni. Having graduated from two MBA’s and boasting experience in the transports and logistics lines of work, Ştefan Gaibu replaces Jean Detrun, who occupied this position as of 2005 and up to the present moment. According to his statements, the year of 2013 will mostly be defined by consolidation for Dacia Logistics Central Department, but it will also be filled with new challenges, new projects and international projects, that are of great importance to the Dacia and Renault family.

Her entire career was built, step by step, in the meat industry, and she now manages the activity of 600 people, as she is basically responsible for everything related to CrisTim’ Group’s cold cuts and meat production. She obtained employment with Recunoştinţa, a factory held by CrisTim Group, eight years ago, and, prior to reaching top position within the production unit, she explains she went through the entire “process flow”. She is familiar with every process carried out in the factory and she states that, in order to manage such an unit, one needs knowledge acquired on a daily basis.

She hasn’t worked as an employee a day in her lifetime; instead she built, alongside her husband, a factory producing medical containers used for blood tests, located near Bacău. In 2007, three years since taking the first steps in building the factory, the first product was launched, a petri dish used for blood tests. The factory is unique in its line of work in Romania, as the only competition products consists in imported goods. The road to this initial achievement has certainly not been a smooth one and neither have future challenges, but last year, Novei Medical obtained a turnover reaching 1.7 million euros, as opposed to the 1.5 million euros turnover reached in 2011. The entrepreneurs are currently working with tens of hospitals and hundreds of private clinics, they have 30 employees and basically will not remove themselves from the business they cannot even imagine they could ever sell.

The year set off to a good start for Paul Ursăciuc: he received the license from the Romanian National Bank, allowing him to undertake his mandate as member of the executive board, after having been promoted, last autumn, to chief operating officer with BCR. Ursăciuc thus became the second Romanian citizen to be part of the largest bank in Romania, after Sergiu Manea, as well as one of the few Romanian holding top positions in a bank held by foreign shareholders. The team he works with directly comprises ten persons, whereas the unit, his managing area (Operation and IT), includes over 1,000 specialists. As of 2007, he has also assumed the position of Chairman of the Internal Audit Committee attached to the Romanian Banking Association.

He leads the global research and analysis team within the information technology security company Kaspersky Lab. However, his story in the virus universe started two decades ago, when, as a high school student, he developed an antivirus software in order to clean up the computer network at I.L. Caragiale National College, as it had become infected with a virus no security solution available worldwide was able to remove. He then developed antivirus software for the high school, afterwards he developed several others; during his last high school year, he received a telephone call from the businessman Radu Georgescu from Gecad and this is how his career in this line of work set off.

Dani Caramihai or one of the four “Fratelli” is 38 years old and he is a shareholder of one of the biggest and most famous HoReCa businesses in Romania, with a turnover reaching 6 million euros last year. He set up, alongside three partners, five Fratelli pubs, the Biutiful pub located in the historic city centre, the membership based club for expats and executives Le Club and the catering company Flavours. Currently, he deals with managing the business, while the others are assigned with either communications, or design or legal affairs. Major decisions, however, are only taken jointly. He worked alongside his father until his 28th birthday, in 2004, when he started writing history – the Fratelli Group history.

Alina Popa, aged 36, is the manager of the financial department within Petrom. She explains that the auditor profession, the one in which she started her career, was very much to her liking, which is why she had a hard time leaving the field of consultancy,  but that she did want to work for the largest company in Romania. With Petrom’s financial department, she implemented financial reporting strengthening, the contraction of reporting deadlines, as well as an internal control system ensuring data accuracy.

Alexandru Ionescu Coşbuc, aged 32, is one of the youngest executives within the local software and service supply company, Siveco.  His position as deputy vice president of the International Accounts and Partners Division makes Coşbuc responsible for managing Siveco’s offices in the United Arab Emirates. At the same time, the executive also deals with developing the company’s government projects in the Arabian Gulf area. Expansion in the Arabian Gulf area is included in Siveco’s international growth strategy, particularly since from last year’s turnover, which amounted to 80 million euros, 30 per cent was export related.