Home Media News An IT&C solution developed by a Romanian company will be used by all EU member states
20.05.2013 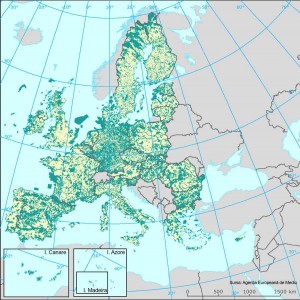 A solution developed by the Romanian TeamNet will be used by all EU member states use in order to generate and report geo-spatial data regarding the distribution area of species and habitats, according to The Habitats Directive.

The solution developed by Teamnet, company with 34 million Euro turnover in 2011, has been integrated in the reporting instrument after a selection between many algorithms submitted by companies from different member states. The beneficiary of the project is the European Topic Centre on Biological Diversity, part of the European Environment Agency.

The beneficiary of the project is the European Topic Centre on Biological Diversity, part of the European Environment Agency.
The application generates the area covered by species and habitats within a GIS (Geographic Information System), a technology that allows the creation, storage, analysis and processing of geo-spatial data. The algorithm developed by Teamnet was adapted to all member states’ requirements and is publicly available.

By the end of June 2013, the members states are obligated to report to the European Commission the conservation status of the species and habitats of Community importance and the measures they have taken under the Habitats Directive.

“The fact that were chose to contribute to the development of the European Union reporting tool is proof that our expertise in the field of GIS technology is recognized internationally. Through the application we developed, we support the EU member states to manage more efficiently their nature conservation efforts”, said Bogdan Padiu, TeamNet CEO.

The TeamNet group has offices in Bucharest, Iaşi, Timişoara, Ploieşti, but also in Bruxelles, Chişinău, Belgrade and Ankara.